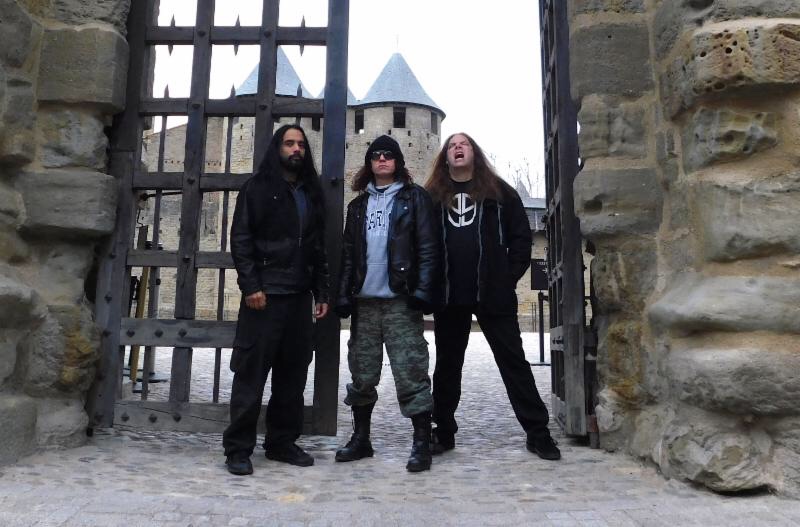 American grindcore icons TERRORIZER kick off their European live takeover today in Poznan, Poland. The trek runs through January 27th in Osnabruck, Germany and features support from Skeletal Remains and De Profundis. See confirmed dates below.
TERRORIZER will be touring in support of their Caustic Attack full-length, released worldwide last fall via The End Records. The band’s first studio offering in six years was produced by Jason Suecof (Deicide, All That Remains, Kataklysm, Battlecross) at Audiohammer Studios in Sanford, Florida and features the apocalyptic cover art of Timbul Cahyono (Rotting Corpse, Pyrexia).
Wrote Decibel Magazine of the record, “If extreme metal is [drummer Pete] Sandoval’s ministry, Caustic Attack is the sort of triumph that’ll have you taking a look at that higher power.” Rolling Stone gushed, “Blastbeat expert Pete ‘Commando’ Sandoval shows why he still excels at the style he helped to perfect…” Metal Injection concurred, “Caustic Attack…is everything devastating you’ve ever loved about TERRORIZER and then some.”
Check out new drum cam footage of Sandoval performing “Conflict And Despair” at THIS LOCATION.
Stream TERRORIZER’s Caustic Attack at THIS LOCATION.
Caustic Attack is out now on CD, LP, and digital formats. Order your copy today at THIS LOCATION.
TERRORIZER w/ Skeletal Remains, De Profundis:
1/10/2019 U Bazyla – Poznan, PL
1/11/2019 Club From Hell – Erfurt, DE
1/12/2019 Barrak – Ostrava, CZ
1/13/2019 Coloseum – Kosice, SK
1/15/2019 Viper Room – Wien, AT
1/16/2019 Backstage – Munich, DE
1/17/2019 Sunset – Martigny, CH
1/18/2019 Revolver – San Dona, IT
1/19/2019 Legend – Milan, IT
1/20/2019 Z7 – Pratteln, CH
1/22/2019 O’ Sulivans Backstage By The Mill – Paris, FR
1/23/2019 Fluor – Amersfoort, NL
1/24/2019 Turock – Essen, DE
1/25/2019 Gebr. De Nobel – Leiden, NL
1/26/2019 Poppodium Iduna – Drachten, NL
1/27/2019 Bastard – Osnabruck, DE
Before Pete Sandoval recorded Morbid Angel‘s first album, 1989’s Altars Of Madness, he performed on two demos and a split album with his original band TERRORIZER. Today, the group’s 1989 full-length debut World Downfall is still considered a pinnacle for death metal and grindcore, featuring impossibly fast blastbeats and double-bass drumming along with a blitzkrieg attack by late guitarist Jesse Pintado(Napalm Death), and ex-vocalist Oscar Garcia (Nausea). The 1989 lineup was rounded out by Sandoval and then-fellow Morbid Angel bandmate David Vincent on bass.
Over the next twenty-three years, Sandoval took time between Morbid Angel albums to continue working with TERRORIZER, recording two more cataclysmic full-lengths, 2006’s Darker Days Ahead and 2012’s Hordes Of Zombies. And now, another six years down the burning highway, TERRORIZERis back with Caustic Attack, their heaviest and most eclectic album to date.
TERRORIZER started working on Caustic Attack in 2014, but before they could lay down a single bar of music, Sandoval had to make sure he was healthy enough to work on a new album – which was far from a sure thing. Rewind to 2009 when Sandoval’s suffered a severe back injury caused by decades of Olympic-class death metal drumming. After seeing different doctors and exploring his options, Sandoval opted for invasive surgery to repair the deteriorated discs between interlocking vertebrae in his spine.
By 2013, Sandoval was feeling pretty good, so he got together with multi-instrumentalist Lee Harrison, who played on Malevolent Creation‘s 1989 demo a year before giving birth to metal veterans Monstrosity, which have released five full-length albums to date. In 2007, Harrison joined up with fabled Crimson Glory singer, Midnight, with whom he worked until the vocalist died in 2009. Harrison has also played guitar with Obituary on tour in South America in 2012. Now, he’s deadly serious about his role in TERRORIZER, but at first playing with Sandoval was more like a hobby.
Feeling confident and comfortable again behind the kit, Sandoval invited Sam Molina, who played with Harrison in Monstrosity, to join them on bass, and the trio started working on songs for Caustic Attack. A violently explosive album for increasingly turbulent times, Caustic Attack is the sound of a world nearing apocalypse. The songs conjure images of warplanes on bombing runs, giant tanks obliterating small villages and the endless rattle of machine guns mowing down everyone in sight.
Sandoval has long been known as one of the fastest players in death metal – the pioneer of blastbeats – and he doesn’t hold back on Caustic Attack. At the same time, even the fastest songs are tighter and more precise than TERRORIZER have ever been thanks to veteran producer Jason Suecof, who’s painstaking method of recording showcases Sandoval and his team at peak capacity.
The proof is in the pummeling. There are flesh-shredding grindfests like “Turbulence,” “Caustic Attack,” and “Poison Gas Tsunami,” each of which swoops down, destroys, and depart in under-two-minutes. Then, there are the nearly five-minute-long tracks, including “Infiltration” – which slows to a thunderous breakdown before ramping back up to hyper-speed -and “Wasteland,” a global conflagration with undeniable guitar hooks and a lethal mid-song chug that reveals previously unexplored diversity and depth.
“If extreme metal is Sandoval’s ministry, Caustic Attack is the sort of triumph that’ll have you taking a look at that higher power.” – Decibel
“Blast-beat expert Pete ‘Commando’ Sandoval shows why he still excels at the style he helped to perfect…” – Rolling Stone on Caustic Attack’s title track
“If you’ve ever accidentally spilled anything super-acidic on yourself, it’s not hard to imagine ‘Invasion’ as the panicked soundtrack to searing flesh. The band ain’t called ‘TERRORIZER‘ for nothing.” – MetalSucks on “Invasion”
“…a minute-long onslaught of blasting fury and muscular staccato riffs….” – Revolver on Caustic Attack’s title track
“Caustic Attack…is everything devastating you’ve ever loved about TERRORIZER and then some.” – Metal Injection
“…a fine offering that few will match for its savagery.” – Overdrive Magazine
“…this album rips from start to finish.” – No Clean Singing